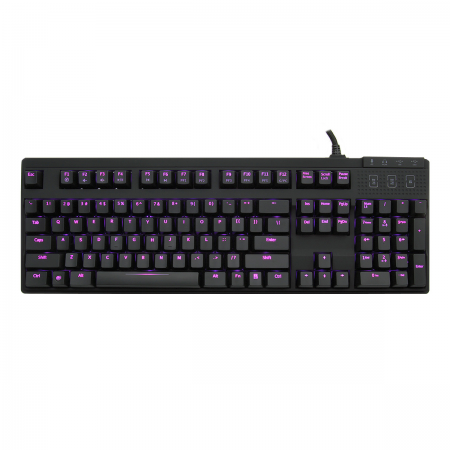 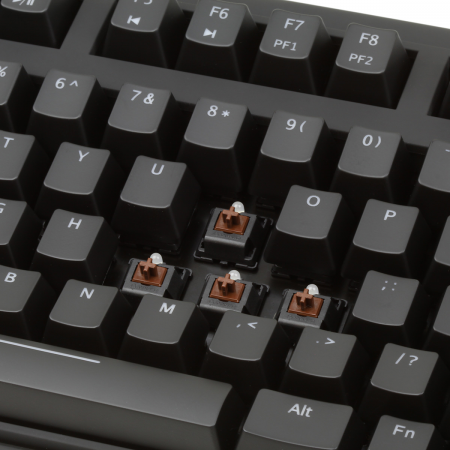 Connectivity:
EAN / UPC #:
609456362702
Illuminated Backlit Colors:
Key Switch Structure:
Keyboard Size:
Multimedia Function:
Product Color:
Product Dimension (inch):
17.5 (L) x 5.7 (W) x 1 (H) inch
Special Features:
This is my second mechanical keyboard, and this one is amazingly well built. It's solid, heavy and has great positive action in every key. It has a number pad which I love, I don't know how I would ever live without it.

It's also Nkey rollover with no ghosting, which means that you can press every single key on the keyboard at the same time and they will show on screen in the order that you pushed them. And there is no ghosting which means you'll never get a key that you didn't press like some other keyboards. All this is over USB 2.0, which is incredible, I still have no idea how they did that over USB.

The LED bulbs are on each and every switch, it's not a light board like a lot of other keyboards. You can change the brightness with 4 steps, the 4th being a pulse mode.

The Cherry MX Brown keys are wonderful for gaming + typing, but I think that I would enjoy MX blues for typing more, but the noise is too much for my housemates.

Great price, excellent packaging, not a single misstep from this keyboard.

The only "issue" I'm having is that the LED lights remain on even after I turn the computer off, which annoyed me at first but now I kinda like it because it's a wonderful nightlight!
AluminumHaste 04/29/2013, 02:27
Simple, beautiful and responsive

I wanted a new keyboard with blue backlighting and cherry brown mechanical keys that would fit onto my small (11"X32") mouse/keyboard tray on my computer desk. Size was the limiting factor for me, as I play a lot of games and many mechanical gaming keyboards I considered were huge - adding more real estate to accommodate a bunch of macro keys I didn't really want. I looked at dozens of different brands and models for several months, and was quite close to buying a Razer Black Widow Ultimate Stealth 2013 to compliment my Razer Naga Epic mouse. However, after having a few issues with Razer drivers and firmware and reading countless reviews, the Nighthawk X-8 seemed like a superior alternative for me.

My priorities were; cherry brown mechanical keys, non-flashy aesthetics, high build quality, choice of LED color, compact size, and the ability to run without special software. The X8 delivered in all respects.

The keys are a real joy to use for typing and gaming alike, and the keyboard has a nice matte look that really compliments my all-black setup. The whole board is fingerprint resistant, and it's not covered in a bunch of garish logos and out of place colors. It just looks like a classy yet normal keyboard, which is a relief after seeing some of the questionable designs from other brands. The keyboard doesn't look overly flashy aside from the illuminated keys, which is a big plus if you are sharing the PC with a non-gamer as I am. My wife loves it so far. The Windows key is a spiral instead of a Windows logo, but it's no big deal to me.

The keys feel wonderful to me. It makes typing a real pleasure. There's just the right amount of resistance so you can type without depressing the keys all the way down if you desire. It's definately louder than I am used to with a standard cheapo keyboard, but only slightly so. The clicking on browns is pronounced, yet pleasant, and a recommended entry point for those new to mechanical keyboards. The braided cable is sturdy yet flexible, and the mic/auido passthrough is a nice bonus feature for headphone users (though I don't take advantage of it at present, and leave the pair of 3.5mm plugs unused without problems.) The 2 USB 2.0 ports are another extra I don't plan on using as they have limited voltage and can't charge many devices, but it would be great for something like a tiny bluetooth dongle or flash drive. On the plus side, you don't need 2 usb ports to use the hub, which is nice. There is a funcion key that allows you to use the F-Keys as multimedia controls and adjust backlighting. All of these work fine and don't clutter up the keyboard with superfluous switches.

I was really put off by the limited backlighting choices on many of the mechanical keyboards I considered. Logitech only offered white while Razer only offered green. Thankfully, the Nighthawk had numerous options, including my favorite - blue. It looks really great, and I was able to set my Naga Epic mouse to the same shade. It really is a sight to behold at night.

The size was just what I wanted... there are Filco and other mechanicals that lack a numpad and aren't as wide, but I love numpads for calculations, and wanted one. However, I needed one that was a standard width and height. I also only had 2' of height to work with so that my computer desk would allow the keyboard tray to work correctly, and many alternatives feature tall designs that would work for me. The nighthawk is compact, and will fit into all but the most restrictive of workstation environments.

Finally, there's the fact that it works without special software. Sure, you can download the macro software that lets you reprogram any key an make them do whatever you want. You can also use the function key to switch profiles for numerous macro profiles. However, I'm not really into macros, so I didn't install the software and don't intend to. You can disable the Windows key without the software, which is a feature I appreciate.

In short, I love this keyboard. It makes the Saitek keyboard I owned previously and the Dell I use at work seem like total junk. It's a pricey board, but if you are considering getting a mechanical keyboard and want something that has a beautiful simplicity and a magnificent feel, I highly recommend the X8 (or the X9 if you want Cherry Red keys.) The fact that it doesn't rely on custom drivers means it should remain relevant for years to come.
Perfect Consumer 04/23/2013, 14:11
It was exactly what I wanted. Performs perfectly. White backlight is awesome. For a second when I bought I didn't realize the 4th backlight option was a constant fade in and fade out and it threw me.

Functionality is great. Key strokes are clear and defined. I use for typing as well as FPS and games like DotA 2.
Get one. You won't be disappointed.
Jp 04/21/2013, 14:15
I don't really know what else to say. This is by far the most comfortable typing experience I've ever had. If you don't buy one of these, you're completely missing out. Customer service is exceptional, the product is way beyond what I expected, and I couldn't be happier. Probably the best tech investment I've ever made.
Jason Worner 04/20/2013, 11:43
I went from a membrane based keyboard to MXBW and i have no regrets.

The packaging and boxing were amazing and make me feel like I was opening up some crazy expensive item. (I guess it was 150 dollars...)

Everything is great. Lighting is pretty. Switches are awesome. My WPM has increased 25% or so. I'm reaching 100~ pretty consistently when I'm typing up reports or papers. I enjoy the tactile feel of the Browns over the linear Red switches and clicky Blue switches. My ONLY con is the "memory foam" wrist rest that comes with the keyboard. I use it, but I have to space it out from the keyboard since my fingers are a bit longer.

Overall... great purchase.
Rayden Cheung 04/08/2013, 00:55
Absolutely Awesome!
I purchased this keyboard after having backlight issues with my Razer BlackWidow Ultimate. Razer has horrible customer service and extremely poor quality control. Their software sucks too! Enough about them, on to this beastly beauty of a keyboard.

I can't say enough! The keys are awesome. I have owned 3 mechanical keyboards as of this one. My first was a dasKeyboard also with Cherry MX browns. This keyboard provides the same typing experience as my das. I use the das at work and this keyboard at home. I wanted a backlit keyboard mainly for "cool factor" but I had to have a mechanical keyboard. I did a lot of research before I decided to go with this awesome keyboard. I have to say that I enjoy this board even more than my das, mainly because of the costar stabilizers. My das uses Cherry stabilizers, also good but they give a mushy feeling to the larger keys where costar has a much more consistent pressure to actuate and you can press any part of the larger keys without worry, it will actuate.

The backlight is awesome, works without software! The build quality is superb! The matte finish is way better than the gloss most manufacturers use for their mechanical boards. Everything about this KB is just amazing!

The only aspect I dislike about this board is the status lights for Num Lock, Caps Lock, and Gaming mode. These status lights are at maximum brightness at all times, they do not match the brightness setting for the rest of the keys. This is not a problem, only a minor annoyance should you want to use the low or medium backlight settings.

All in all this is an awesome KB. This board works better than any other mechanical keyboard I have used, and the balanced feature set makes it aesthetically pleasing. If you want quality workmanship and awesome customer service, buy any Max Keyboard!

I would recommend this keyboard.
Jeremy M 04/06/2013, 01:51
Great Keyboard!
This is a nice basic design keyboard. Good quality and feels solid. The Cherry MX Brown keys are perfect for feel and are not loud and clicky like Cherry Blues. Plenty of range for backlight brightness.

I'm more of a mac guy, using apple keyboards for most of my machines (the older full sized style, not the newer smaller ones).

I have a gaming pc / hackintosh, and wanted a keyboard for it. This keyboard fit the bill. The keys are responsive, push back even, and the lighting is perfect (and changeable if you prefer something else). It also worked in mac mode with no problem!

About MAX Keyboard
Max Keyboard is a manufacturer for high end computer keyboards. We know that build quality is the foundation for an excellent keyboard, while customization is also an important element to make your typing enjoyable and more efficient. We at Max Keyboard ensure that each keyboard is made to the highest standards.

OUR MISSION
We at Max Keyboard are dedicated to providing a high quality, comprehensive range of products to meet even the most specialized of keyboard and accessory requirements. Customers are the reason we exist. We hope to keep all our customers happy and turn a one-time customer into a lifelong repeat customer