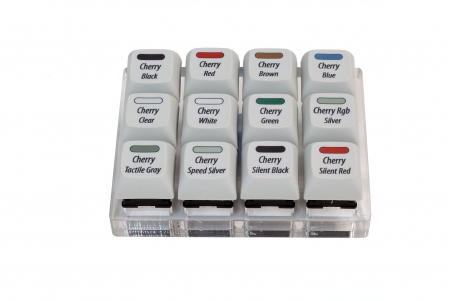 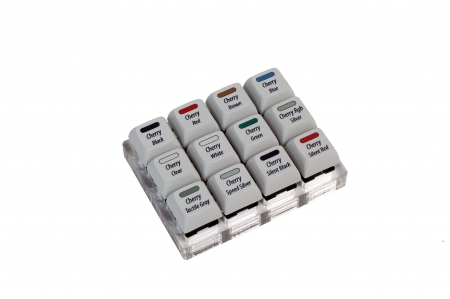 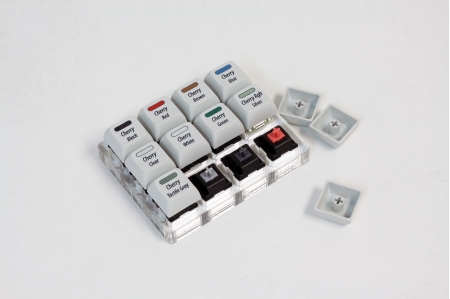 I've been looking at mechanical keyboard for a while trying to decide on a replacement for my keyboard. The problem with shopping for mechanical keyboards online is that you can't actually type and get a good feel for how the keyboard feels when you type on it. So what do you do when you can't sample 4 keyboards when the cost would easily be well around $400 U.S. Dollars? You buy a tester kit! This little kit is the cats pajamas. it has Cherry MX's four most popular switches: Red, Black, Blue, and Brown. Also it includes four clear keys and a dampening O-ring for each key as well (in case you're into sound dampening).

SO, what did this do for me? Well, this gave me a set of physical keyswitches to get accustomed to so that I could gather a better understanding about what kind of keyboard I would like to purchase. I originally thought that I would lean more toward MX Browns, but oddly enough I'm starting to consider Blue's or Blacks' for my keyboard, but I digress:

Pros:
-Has Cherry MX's four most popular switches: Red, Black, Blue, and Brown.
-Lets you get an idea for what type of switch you would like to type with.
-Great little conversation piece to keep on your desk.

Cons:
-A wee-bit pricey for only 4 switches
-After looking around I noticed that there are a couple of kits that include two more switches such as MX Clear and MX Green, and I wish that I could see how those feel under a key.
-Still doesn't give you the full picture when it comes to actually typing on a keyboard, but it does give a little bit of clarity as to how the switches themselves operate.

Overall, I like this product, it's been a big help in educating me about mechanical keyboards. I would recommend this product or a similar type of tester kit to someone who is looking at purchasing a mechanical keyboard but doesn't have the opportunity to test one out.
Colton Smith 05/09/2014, 20:23
The sampler tester kit was very helpful for choosing what switch is good for me. It's pretty good for simulating the feel of a keyboard, and it's quite durable. The included o-rings are also quite a plus. Almost everything is good about this product, except for one oversight, and that there was no discount code on the plastic packaging.
Paul W 04/08/2014, 09:11
Ok, after using this kit, I found out that (to my surprise) I will want an MX Blue with o-rings (I was biased toward browns before this).

The reason: I barely feel the brown's feedback, I don't really believe I'll feel it while typing real fast... maybe I am wrong, maybe after some conscious training time I could get myself to feel the browns.

I know the blues will be a bit louder than I'd like, so, I added the o-ring, and found its sound level to be similar to that of a brown without the o-ring (the blue being just a bit louder).

As a lot of other people already stated, it is not the same to test with a single switch, and you will likely feel different when you have the complete keyboard.

TBH, I am still a bit uncertain between Brown and Blue.... the fact that the blue feels a bit more firm than the brown was the decisive point: it is less likely that I'll hit a second key by mistake, and if I do, I will "hear" that I did (the two "click" sounds).

When my complete keyboard arrives, I'll update my experience about "how useful" was this sampler in my final selection.

UPDATE (20140423): I just got my complete keyboard (been using it for a couple of hours now), and I can say this sampler indeed helped me choose the right keyboard. Before using the sampler, I thought the blues would be too loud for me (and was biased toward browns): they are not, I am enjoying my keyboard with MX-blue switches. I'll update at a later point if I get annoyed by the keyboard, but I don't think so.

As an additional note, the *actual* keyboard is noticeable louder than the sampler, this is mainly because the sampler's board is smaller, but this was expected (bear this in mind). I am really liking the sound and feel of the keyboard.
Camargo T. Jose Ildefonso 04/05/2014, 18:14
must have buy if you plan on buying mechanical keyboard.I really like that it came with rubber o-rings I really prefer the feel with rubber o-rings as well, I decided I will be going with Cherry MX Brown with o-Rings. I am waiting for Corsair's new RGB keyboard. Wish it was a little cheaper, but feel s well built.
Grant 03/31/2014, 11:55
Good way to test each Cherry MX switch before you drop $80-$150 on a new mechanical keyboard.

Pros:
All four switches are on a PCB board, so you are able to set it down and press on each key much like you would for a keyboard. You also get o-ring dampeners to try those out.

First off: Solid construction, the inclusion of the bumpers much appreciated;
I had to go through a third party, Tiger-Imports, and I payed a premium for the 3rd party ( ~$30 ) as your in house availability was nill. Even with that it was well worth it. I've been able to confirm my research and development of my customer board.

To anyone considering purchasing a mechanical Keyboard I STRONGLY recomend purchasing one of these samplers. These keys have wild and subtle differences that you really do need to get your fingers on to make sure that you choose the correct switches.

That being said, there is one issue. While I did go through a third party, the packaging does appear to be original. And as original packaging, I should expect to find a promo code on the back as described on your product page. Even under a blacklight, no code.

I plan to purchase a fully custom board, so the promo isn't even applicable. I simply hope that this oversight of a small detail is not a precursor to the development of my board.

All in all ( tl;dr )
8.5 / 10 : B
-.5 for having to go through 3rd party
-1 for promo overlook
Alexander P 02/23/2014, 03:53
I got one of these ahead of my max keyboard. WARNING: I read that if you buy it direct from max keyboard (instead of through Amazon) you get 15% off your max keyboard order. I was lucky and wanted blue switches so I could order my board from Amazon as well - but if you want your board customized (as only max keyboard can do) you'll need to order from them and you'll be better off ordering this product from their website as a result.
D. E. Dreyer 01/31/2014, 01:38
I used this to decide on the type of switch I wanted to look for in a mechanical keyboard and it was totally worth the purchase. Showed me exactly what I liked and didn't like about the various key types and I've sent it off to two friends as well for their own use.
Nick Travis 01/23/2014, 22:12
For those who don't yet have a mechanical keyboard and would like to test out the switches before purchase, this tester is perfect.
Casey 01/20/2014, 13:37
I just received this and right when I opened it up, I was impressed with the quality of it. It was on a sturdy plastic board, I would have preferred to have it on an aluminium board for the real feel of using a mechanical keyboard. The keys were of nice quality, nothing to complain about. I like that they were clear so you could see what switch you were using.

The reason why I am giving this only 4 stars is that I think it was a bit expensive, Instead of 10 dollars, I think it should be 5ish maybe 7 dollars. But I will get a lot of use out of this letting people find out what type of switches to get when they order a new keyboard.